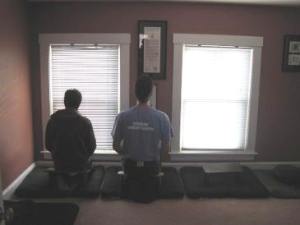 “Zazen is a particular kind of meditation, unique to Zen, that functions centrally as the very heart of practice. In fact, Zen Buddhists are generally known as ‘meditation Buddhists. Basically, Zazen is the study of the self.”

The great Master Dogen said, “To study the Buddha Way is to study the self, to study the self is to forget the self, and to forget the self is to be enlightened by the 10,000 things”. To be enlightened by the 10,000 things is to recognize the unity of the self and the 10,000 things. Upon his own enlightenment, Buddha was in seated meditation. Zen practice returns to the same seated meditation again and again. For 2500 years that meditation has continued from generation to generation; it is the most important thing that has been passed on. It spread from India to China to Japan, to other parts of Asia and finally to the West. It is a very simple practice. It is easy to describe and very easy to follow. But like all practices, it takes doing in order for it to happen…………..”